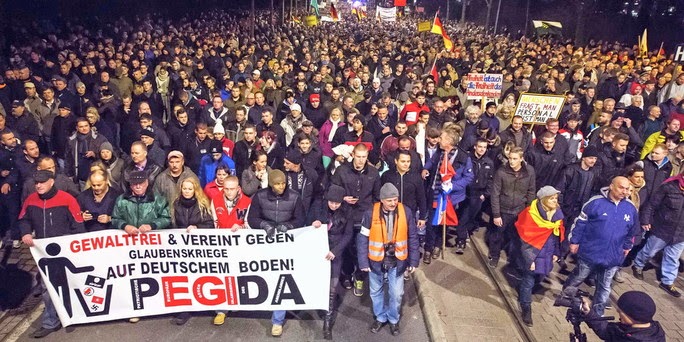 Dresden, Germany— Patriotische Europäer gegen die Islamisierung des Abendlandes or in its English translation, Patriotic Europeans Against the Islamization of the West (PEGIDA) is exploding in Europe.
Huge demonstrations in Germany have sent some controversial shockwaves throughout Europe that has stood by failing to react to the deadly Muslim threat.
Is this a hate based movement or terrorized people coming together for simple survival? That depends upon whose opinion you’re examining.
There can be no argument that Muslim extremism follows this group wherever they go.  Beheadings, bombings and extreme senseless violence directed by hateful Muslims against non-Muslims is the rule rather than the exception everywhere.
The Muslims have been invited guests in civilized Western nations for longer then most of us have been alive.  Generally it’s been without major problem until the last 20-30 years.
Civilization demands that when you’re an invited guest in someone’s nation or home that you behave like one or leave.  Those that don’t behave must be tossed out to preserve the peace.  Many Muslims feel they are somehow exempt from customs, laws and simple decency.
What about the moderate or seemingly peaceful Muslims?  They and their clerics bear a huge responsibility for the savage acts of the militants. They remain silent and by doing so they are no small part of this pseudo-religious, cult based conspiracy of terror.
Muslim culture currently demands they reproduce like rabbits.  In their home nations medical care was non-existent and children died at an alarming rate because of common childhood illnesses that were eliminated in the West.
One thing for sure, Muslim’s demand far too much of their nations they have decided to inhabit.  They instead see themselves on a dangerous global colonization effort.  Muslims simply don’t belong in a civilized nation.
The PEGIDA movement would not exist but as a direct response to innocent lives lost in senseless acts of hateful violence.
German Chancellor Angelia Merkel along with other politicians condemned PEGIDA to preserve their politically correct image.
We are 70 years out of a German period of disgrace, shame and national guilt for Nazi Party atrocities.  Any ethnic conflict is a grim reminder for the German people.
The neo-Nazi’s anti-Semitism has a common bond with Jew hating Muslims.  Neo-Nazis do exist in Germany but have curiously joined with the PEGIDA movement.  Joining with neo-Nazis to combat the Muslim threat is distasteful to most Europeans because of their history of hate.
The neo-Nazi endorsement of PEGIDA tarnishes the image of this organization.  That was not helped by the antics of it’s founder, advertising executive, Lutz Bachmann, when he actually costumed and posed as Adolph Hitler for cameras.
Bachmann quickly resigned from PEGIDA after that huge blunder.
PEGIDA now has a platform to deal with Muslims.  Are these enough to stem the problem?  Frankly I doubt it, in that this is all too little and much too late.
PEGIDA Mandates:
1.  Affirms the right of asylum for war refugees and politically persecuted people.
2.  Advocates to include a duty to integrate into the German Basic Law.
3.  Advocates for decentralized housing of refugees.
4.  Suggests creation of a central refugee agency for a fair allocation of immigrants among countries of the European Union.
5.  Demands a decrease in the number of asylum seekers per social worker from currently 200:1.
6.  Suggests to model German immigration policies after those of the Netherlands and Switzerland and demands an increased budget for the Federal Office for Migration and Refugees to speed up processing of applications.
7.  Demands an increase in funding for the police.
8.  Demands implementation of all asylum laws including expulsion.
9.  Mentions zero tolerance towards criminal refugees and immigrants.
10.  States that Pegida opposes a misogynic and violent political ideology, but does not oppose assimilated and politically moderate Muslims.
11.  Supports immigration as in Switzerland, Canada, Australia and South Africa.
12.  Pegida demonstration on 12 January 2015
States that Pegida support sexual self-determination (opposing "early sexualization of children").
13.  Argues for the protection of Germany's Judeo-Christian coined culture.
14.  Supports the introduction of referenda as in Switzerland.
Muslim terror and crime is a grim reality in Europe. I favor a policy where all able-bodied law-abiding European citizens take a role in national defense.
That is to train and carry concealed firearms to deal with the Muslim threat.  It is unfair and unwise to keep Europeans disarmed and helpless from the savage armed Muslims that are relentlessly killing innocents.
Posted by Paul Huebl Crimefile News at 1/29/2015 06:34:00 AM

Peaceful Muslims are irrelevant because they will do nothing to stop the dangerous kind. Most of the population of Germany was peaceful in 1939 and they did nothing to stop Hitler from starting World War II.

Islam is not a religion of peace. It is a religion that teaches it's followers that they must rule the world and even the peaceful Muslims understand and support it.

Ever since World War II when Hitler created two SS Divisions of Muslim troops in Bosnia (under the command of The Grand Mufti of Jerusalem – a the war time Sunni Muslim cleric) there has been an alliance between Fascism and Islam to wage war against Western Civilization. That is why our President – a modern day liberal fascist does everything in his power to give them a free hand in our country and supports their most radical factions abroad.

We have been supplying arms to the most radical and dangerous factions of Islam in the Syrian civil war. There is no good side in that war. Both are our enemies. The Free Syrian Army is radical Islam and now most have joined ISIS – taking our weapons with them.

I don't use the term fascist lightly. Our Democratic Party today has a direct ideological link to the fascists of the 1930's.