Drone Safety, The FAA and Those Misguided and Self-Appointed Drone Cops 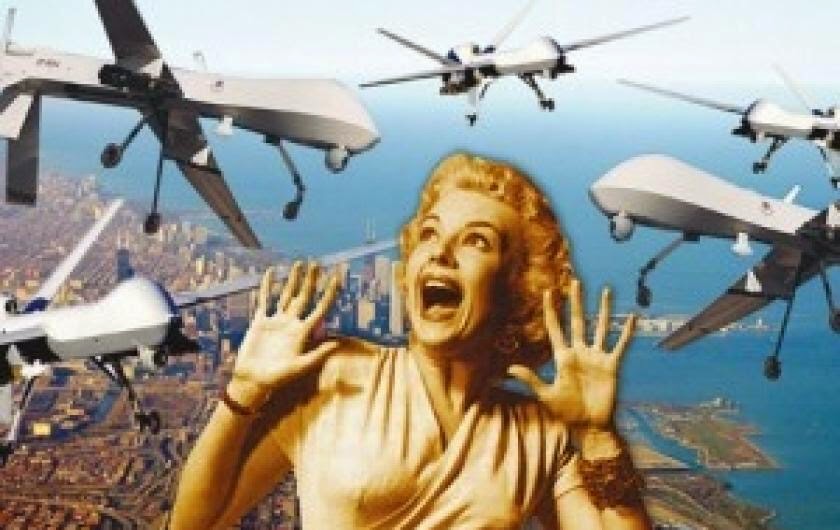 Los Angeles, CA—Yesterday I got a gentle safety reminder as I began to pick up my Phantom 2.  The props suddenly began spinning on their own.  I thought I turned of the battery and then the radio controller.  I’m somewhat hearing impaired and did not hear those telltale sounds that the battery power was not actually shut off.
As I reached for the drone the plastic propellers really spanked my fingers.  I felt pain but suffered no visible injury beyond a little redness that quickly disappeared.  Had I been using carbon fiber props I would have definitely needed stiches and a trip to the ER.  I was lucky my negligence did not cause what may have been termed a minor injury.
Through negligence, I nearly suffered the only kind of injury that the small multi-rotor drones ever inflict.  Thankfully in my case, my precious fingers and the props were none the worse for wear.
To date, the smaller under 55 lbs. multi-rotors have never caused a reported death or significant injury.  That’s a perfect safety record considering there are over a million of these things out there in civilian hands.  Unfortunately the 7,000 helicopters in the world can’t begin to boast similar safety statistics.
The multi-rotor drones are almost exclusively camera drones used to obtain low altitude, slow speed, photo and video images.  These are in no discernable way risky flights.
The FAA recommends that these drones be operated at less than 400 feet and five miles away from airports without advance control tower approval.   They also suggest not flying over the heads of crowds.  Flying near crowds is not an issue.
These voluntary, common sense limits are easy to live with for most of us.
Avoiding other aircraft such as low flying helicopters involved in rescue, media or police activities is imperative.  There is little fear of my little quad damaging a conventional helicopter because of the heavy prop wash that would quickly push my little drone far away.
It’s for the survival of our somewhat expensive drones that we need to always give right of way to any aircraft manned or unmanned.
But for the outright ban on any commercial use there are the reasonable FAA recommendations.   Somehow we wound up with a bunch of self-appointed drone cops/trolls.  They think their role is to dictate to their fellow drone operators with their own laws.  They’re doing a disservice to others by demanding our politician’s make new laws and regulations that will strangle the safe exploitation of drones.
The misguided drone cop/trolls ignorantly scream that flying in any urban area is dangerous and will somehow bring a total drone ban.  They never take into account the perfect safety record or the First Amendment rights of camera drone operators.  Cameras, even flying cameras are constitutionally protected!
Laws may be passed but one by one they will be challenged in court and the First Amendment will always win in the absence of a real and present public safety issue.
Things can and do go wrong and it’s nearly always pilot error but when they do the damage is usually insignificant and limited to the drones.
We have enough fear and loathing of our flying cameras and the bogus drone cops are giving the ignorant ammunition to make arguments for strangling regulations.
It won’t be some 12-year-old kid flying negligently that ruins it for all, but a self-appointed drone cop/troll crying Chicken Little in a Public forum.
We all have a duty to teach other the safe and effective way to enjoy this exciting technology.  Leave the police work to real cops.
Posted by Paul Huebl Crimefile News at 1/05/2015 12:26:00 PM

This website has become "all drones, all the time". I miss the old days when more important issues were discussed.

What about the rights of a property owner when a drone starts photographing in the windows or even the swimming pool with teen age daughters in swimming suits getting a sun tan?

Kyla that's a very simple question and there are simple answers! Using a drone to window peep is both already illegal and difficult.

The drones make noise and have navigation lights. Teen age girls skinny dipping or tanning in the buff are fair targets for all manner of aircraft or satellites.

The camera drones are wide angle and really won't take a recognizable shot unless it gets close enough like your cell phone camera.

Getting that close to someone on their own property with a drone may well constitute disorderly conduct or even assault.

I've not heard a single instance of that kind of conduct yet. Chicken Little has predicted worse.