The Volatile Counterproductively of The Open Carry of Firearms 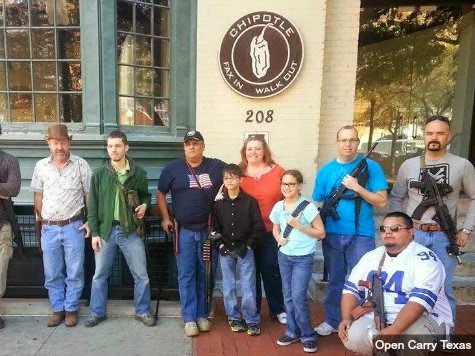 Phoenix, AZ—Most of my blog visitors know my strong and unyielding opinion on our rights to keep and bear arms.  I have personally fought bad gun laws through civil actions in the courts.  I have lobbied for gun rights at the State Legislature for many years.

Open carry of firearms has its place.  On the range, while hunting, at various firearm related events.  That would also be a reality during serious civil unrest or worse.

Open carry is indeed a Constitutional right but that alone does not make it in anyway clever or socially acceptable.
The whole point of firearm concealment is to place robbers, rapists and killers at a serious tactical disadvantage.  Since self-defense is the goal why would anyone want to give a criminal the advantage and ability to overpower and disarm them by openly carrying?
Open carry does not belong at the local Starbucks, Chipotle, or in mixed company.  By mixed company I mean around other than likeminded gun owners.
Open carry has become a “in your face” form of protest and considered by gun rights haters as pure intimidation designed to incite.  Open carry may be your right but using it for political provocation is counterproductive and dumb.
If you want to influence those people with irrational fear of firearms please teach them safety and take them shooting.  Unnecessary open carry makes as much sense as trying to calm an angry bull by waving a red cape.
Arizona for decades banned all concealed carry but allowed open carry without a permit.  The problems created by open carry were substantial.  Ignorant gun haters were always calling the cops when they saw guns and become angry when the cops would not arrest an open carrier.
Often the complainants would exaggerate and claim that the gun was pulled or pointed at them!  The gun carrier often had to stand trial for Aggravated Assault on the unsubstantiated claims of some lying jerk. If the judge or jury believed the complainant a mandatory five-year prison term would be handed out!
As a criminal defense investigator I’ve had many first hand experience with some of those horrible cases.
Finely, Arizona accepted concealed carry and later went the extra mile of not requiring permits of any kind. Those phony Aggravated Assault complaints dropped dramatically.
Unnecessarily carrying of an exposed firearm is downright dangerous.  There is of course the criminal that would like to simply strong-arm the gun away from you.  Then there are those dim bulbs that believe that you are carrying exposed because you want to intimidate, frighten or even assault them.  Open carry is too often the subject of unnecessary and unwarranted verbal arguments and disturbances.
Simply stated a person carrying and exposed firearm is much more likely to be involved in a breach of the peace than having it concealed.
We cannot change the thought process or behavior of the intolerant, ignorant and malicious people in our world.  Why would you want to give them a tool they’d use to insult, attack or cause your arrest, prosecution and possible conviction?  If they can’t see your gun it won’t be the subject of controversy or worse.
Nobody wants to be a legal test case for gun rights considering the high price of lawyers and the reality of judicial tyranny.   Most people don’t understand that you can challenge the constitutionality of gun laws without violating them or being arrested.  You simply file a civil complaint in court to challenge the law asking for a Declaratory Judgment striking down the bad law.
It helps to have the NRA or SAF paying your lawyers too!  That’s the gentleman’s way of winning.  That’s what the various plaintiffs did in the Landmark Heller and McDonald cases that were favorably decided in the U.S. Supreme Court.
As for the debacles at Starbucks and more recently at the Chipotle restaurants nobody takes in account what the business owners need.   To take sides on the volatile gun rights issue is insurance that one side or the other will boycott that business.
No business wants to become embroiled in a political issue of any kind.  Why would you want to force an innocent business owner to take a position when you know it may destroy his or her source of income?
Please leave innocent bystander businesses out of your political arguments.
As for open carry, it has its place well outside of political statements, demonstrations or inciting hateful conduct.  Rather than provoking those gun-rights haters, kindness and tolerance goes so much further.
All of my gun owner friends are gentle law-abiding folks that understand the necessity of the ability to defend themselves and families from the unthinkable.
Being hostile, rude or insulting has never accomplished anything positive for anyone.  Simple kindness and a warm smile wins every time!
Let me also say business that through posted signs seeks to preclude law abiding gun owners, deserve to be boycotted.  Some of them are learning the hard way that such signs invite armed robbers.
Posted by Paul Huebl Crimefile News at 6/03/2014 10:14:00 AM