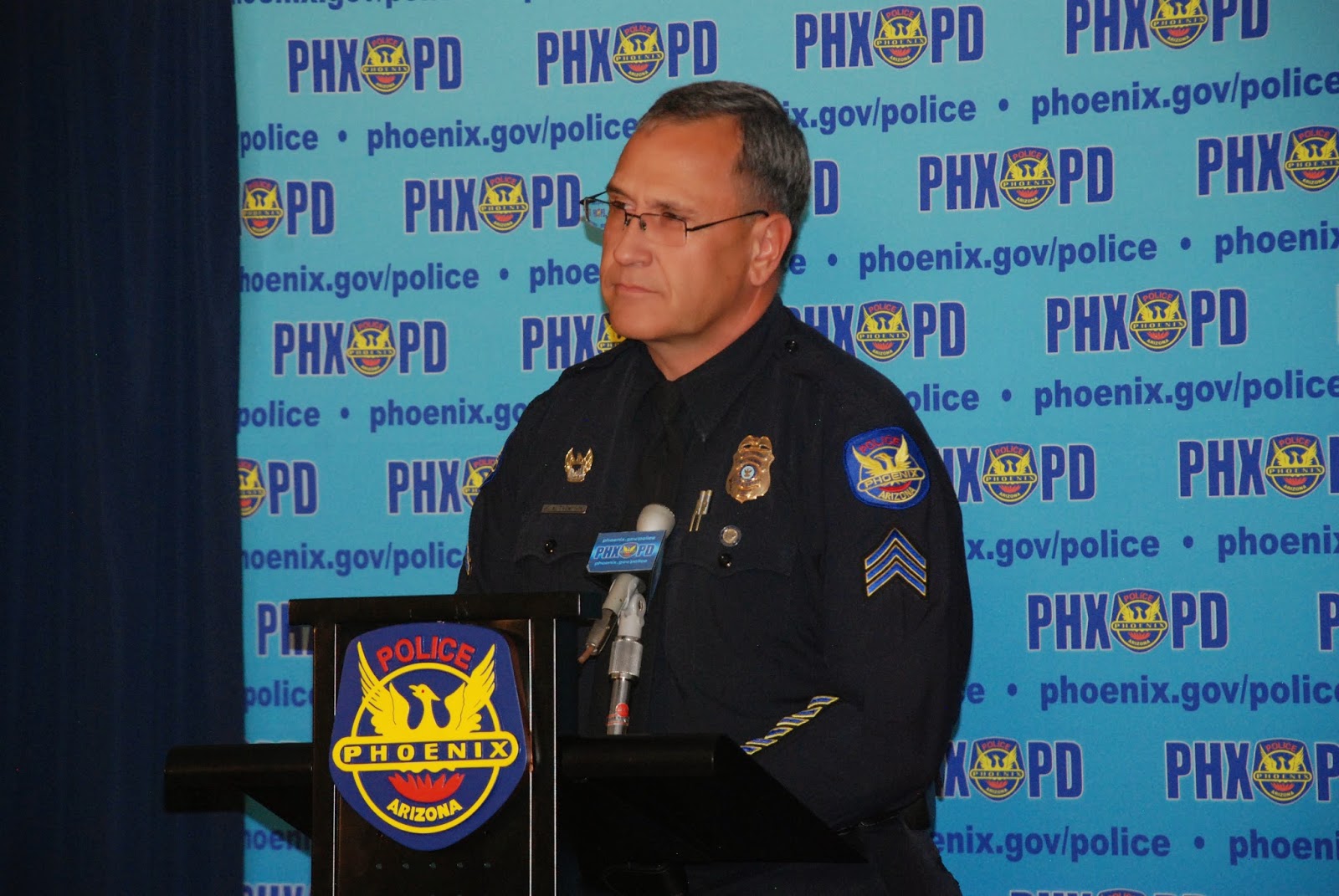 Phoenix, AZ—Politicians and their appointed police chiefs across this nation demand nearly total control of police related information.
It’s epidemic in the larger cities controlled by Democratic Party mayors.  They see the value of leaving their citizens with a false sense of security and public safety as they spin any and all information accordingly.
Police business was once considered just that.  Certain information was kept away from all but sworn police officers.  That’s not the case because the local politicians have demanded and unlawfully obtained access to sensitive police data nearly everywhere.
Politicians also demand the ability to influence arrests and prosecutions of friends, relatives and of course their campaign contributors.  Illicit influence is used to both free the guilty and even jail the innocent.  Cops and prosecutors have no choice but to look the other way.  Whistle blowing in law enforcement circles simply does not exist.
Our cops are considered expendable so reality dictates that the bosses find a sacrificial lamb or two to frame, fire and destroy their reputations.  This creates the appearance of avoiding corruption by eating a few of their own.
If you think things are operating by the book anywhere, you’re dead wrong.  Of course the actual Obstruction of Justice must be subtle and well below media radar.
Controlling the cops is somewhat easy for politicians because they control the lives of officers through their jobs, working assignments and pensions.
Because of political corruption the FBI’s Uniform Crime Reports system is almost totally unreliable because of local politicians and their police chiefs.
They have learned that they can skew statistics to get additional federal funding or to hide things like murders from the public.  They’ve found creative ways of making crime statistics appear almost anyway they want.
I’ve been both a cop and an investigative TV news producer over the last four decades and have seen this all-first hand.
The police agencies have learned that they can control information by the use of Public Information Officers.   These are the kind of people that know how to do exactly what they’re told by superiors.
PIO’s are not there to disseminate information but to protect and hide it.  They provide not a single syllable beyond what the public record demands.  They do this with a broad smile and appearance of cooperation.
PIO’s know how to arrange a live news conference on an important crime story.  They love the captive audience that live TV gives them.  The PIO’s dutifully subvert the news conference purpose and instead use it for face time of the local politicians that have absolutely nothing to do with the story.
Then they all brag about the “great work” they are doing for the taxpayers until the mass nausea sets in.  Only after that they will say a few words about the story involved.
Today’s local news is troubled in a big way.  Lost audience and revenue has eliminated any challenges to the PIO’s disinformation.  The PIO’s and their bosses love this and know the stories will spin they way they want them.
As an investigative TV news producer I’ve made it personal policy to purposely avoid the PIO’s and not waste my time with them.
Instead I locate and contact the witnesses, victims and property owners for the real story.  Instead of waiting for the cops to tell me about the backgrounds I investigate the newsmakers myself.
If news organizations like allowing the PIO’s to tell their audiences what the news is, reporters and producers are not necessary.  Let the PIO’s Skype in their sound!
No police department, politician or other obstructionist is going to prevent me from digging and learning the truth about a story I’m working.  Getting a news director to authorize my time these days is the real challenge.
I’ve always watched the lamest of reporters suck up to the PIO’s thinking they will somehow get something extra.  The PIO’s are enemies of the truth and exist only to demolish or derail anything that might show government ineffectiveness or questionable motivation.
Reporters should simply refuse to deal with the PIO’s.  If the cop or a low level supervisor like a sergeant or detective handling the story you're working has been muzzled that all the more reason to skip wasting time with the PIO’s.
At a minimum no sound bites, name recognition belongs in print or on video of any police PIO.
Every journalist that covers crime and courts should know this.
The truth is that many reporters these days only want to get their minute-thirty second package up or six-inch print story without any effort.  What a sad existence.  I say do it right or don’t do it at all.

This may be information instead of disinformation

The U.S. Supreme Court Is Marching in Lockstep with the Police State

Police officers can use lethal force in car chases without fear of lawsuits. In Plumhoff v. Rickard (2014), the Court declared that police officers who used deadly force to terminate a car chase were immune from a lawsuit.


Citizens only have a right to remain silent if they assert it. The Supreme Court ruled in Salinas v. Texas (2013)

Police have free reign to use drug-sniffing dogs as “search warrants on leashes,” justifying any and all police searches of vehicles stopped on the roadside. In Florida v. Harris (2013), The ruling turns man’s best friend into an extension of the police state.

Police can forcibly take your DNA, whether or not you’ve been convicted of a crime. In Maryland v. King (2013), a divided Court determined that a person arrest

Immunity protections for Secret Service agents trump the free speech rights of Americans. The court issued a unanimous decision in Reichle v. Howards (2012), siding with two Secret Service agents who arrested a Colorado man simply for daring to voice critical remarks to Vice President Cheney. However, contrast the Court’s affirmation of the “free speech” rights of corporations and wealthy donors in McCutcheon v. FEC (2014), which does away with established limits on the number of candidates an entity can support with campaign contributions, and Citizens United v. FEC (2010) with its tendency to deny those same rights to average Americans when government interests abound, and you’ll find a noticeable disparity.

Police can break into homes without a warrant, even if it’s the wrong home. In an 8-1 ruling in Kentucky v. King (2011),

Police can interrogate minors without their parents present. In a devastating ruling that could very well do away with what little Fourth Amendment protections remain to public school students and their families—the Court threw out a lower court ruling in Camreta v. Greene (2011), which required government authorities to secure a warrant, a court order or parental consent before interrogating students at school.

It’s a crime to not identify yourself when a policeman asks your name. In Hiibel v. Sixth Judicial District Court of the State of Nevada (2004), a majority of the high court agreed that refusing to answer when a policeman asks “What’s your name?” can rightfully be considered a crime under Nevada’s “stop and identify” statute. No longer will Americans, even those not suspected of or charged with any crime, have the right to remain silent when stopped and questioned by a police officer.

The cases the Supreme Court refuses to hear, allowing lower court judgments to stand, are almost as critical as the ones they rule on. Some of these cases, turned away in recent years alone, have delivered devastating blows to the rights enshrined in the Constitution.

Legally owning a firearm is enough to justify a no-knock raid by police. Justices refused to hear Quinn v. Texas (2014)

The military can arrest and detain American citizens. In refusing to hear Hedges v. Obama (2014), a legal challenge to the indefinite detentio

When all is said and done, what these assorted court rulings add up to is a disconcerting government mindset that interprets the Constitution one way for the elite—government entities, the police, corporations and the wealthy—and uses a second measure altogether for the underclasses—that is, you and me.

Keep in mind that in former regimes such as Nazi Germany and the Soviet Union, the complicity of the courts was the final piece to fall into place before the totalitarian beast stepped out of the shadows and into the light. If history is a guide, then the future that awaits us is truly frightening.

Time, as they say, grows short.
Full version at http://agovernmentofwolves.com

Police have become so heavy handed these days that it's not prudent to call for help; best to take care of your own issues. I have seen too many videos of cops brutalizing people "because they can." Where's THAT in human behavior? It's thuggery and evil. No one trusts the cops now -- and it's the cops own doing. I used to be pro-cop -- in all honesty, was married to two, and worked at a cop shop. I saw things that would curl your hair. Things people to do one another is horrendous. I couldn't take it. Had to remove myself from all "cop" relationships. In all my experience with police, marriage, family, friends, and as co-workers, I have only seen a handful I would trust with my life. I wish for the sake of the cops, that they would find God, find peace and stop hurting the people who should be able to trust and honor them. I used to have great respect for those in blue out there "keeping us safe." But that's all gone now. I'm not a criminal but have certainly been abused via marriage to cops. It's a tough and disgusting job that takes its toll on your spirit. Get God. He's waiting for you. Find life again, find peace and love. It's there, even in these harsh end-times. God bless every single LEO and God lead them to YOU, they need YOU badly.

Let's be careful out there...

If you are true to the original constitution and honestly desire to help keep this country safe, DO NOT TAKE FIREARMS AWAY FROM THE PEOPLE. Honor the 2nd amendment and help us protect ourselves. You'll need the people to step up and help You one day, so have respect for civilians if you want the same respect. Respect our right to self defense. Look at the UK, Australia, Mexico, Hitler's Germany when they took guns away.... learn from the past or you're doomed to repeat it. We can change together.