Sanford, FL—The explosive and racially charged trial of George Zimmerman has generated massive hateful and threatening chatter on the Internet.  That venom has intensified as prosecutors have floundered.  We’ve watched every witness prosecutors call deliver significantly more evidence favorable to the accused.
The remaining state’s witnesses such as the medical examiner are not going to change the reality that Travon Martin was an athletic, young, racist thug.  Martin senselessly attacked, disfigured and attempted to murder Zimmerman by bashing his head into a sidewalk.  That placed Zimmerman in legitimate fear of his life and justified the use of deadly force.  This evidence was established without the defense calling a single witness.
This failure by prosecutors to deliver to the jury what they promised has not gone unnoticed by African-American trial watchers. Many of them are about to explode with hate and anger.
Unless prosecutors can offer something substantial this cases is headed for a directed verdict, meaning the judge not the jury will find Zimmerman Not Guilty without the jury deliberating or rendering a verdict.   Should that happen the defense would not be required to put on any evidence and Zimmerman will be cleared.
In the state of Florida they have an unusual policy to pay a maximum amount of $50,000.00 to anyone found not guilty at a trial.  That won’t cover but a small percentage of what Zimmerman actually paid to his lawyers.
The media “evidence” presented against Zimmerman included doctored 911 tapes and a bogus profile of Zimmerman as a racist predatory vigilante.  The conduct of Zimmerman related to his duties on the Block Watch Program was somehow turned into the “Black Watch Program.”
This sensationalism went World Wide getting huge play in Europe.  Zimmerman was castigated as evil personified by the world’s press.  I have many friends in Europe that scolded me for living in a nation that allows for “this blatant racism.”
The propagandized anti-gun rights publicity led by Barack Obama and Eric Holder has colored the perception of millions of African-Americans that believe that all of the bogus hype was true.  The monster specter of Social Media has echoed the hate and hype dividing the nation.
The threats of riot, murder and total violence are the worst any of us have ever seen.  I Googled the term “Kill Zimmerman” and learned there ate 79,000 hits!  I grabbed the screen and you can see for yourself what came up!  It’s beyond shocking.
The jury has not yet been sequestered and they are being exposed to this screaming and vile chatter unless they place themselves in a soundproof booth every night.  Can these six gentle ladies deliberate fairly when they know they will be targeted for violence should they acquit Zimmerman?  I say the challenge facing these women is beyond what they could possibly endure.  That goes double for the single African-American woman on the jury that must return to her neighborhood.
Judge Debra Nelson will not be immune to the threats against her and her family members.  She has some protection but webcast, broadcast and newspaper images of her have already placed a target on her back!  Would Judge Nelson be able to fairly rule on the expected defense motion for a directed verdict?  I think we all know the answer.
Imagine for a moment you were on the Zimmerman jury?  What would you be thinking?  If you had the guts to find Zimmerman how would you be able to protect yourself and your children from the very real threat over the coming months?
It’s the prosecutors that brought this frivolous and malicious prosecution.  They are the ones that should man up and Motion the court to dismiss this case.  It is the right thing to do and it would remove the judge and jury from danger.   We all know that evidence of murder or even a lesser offense has just not materialized. 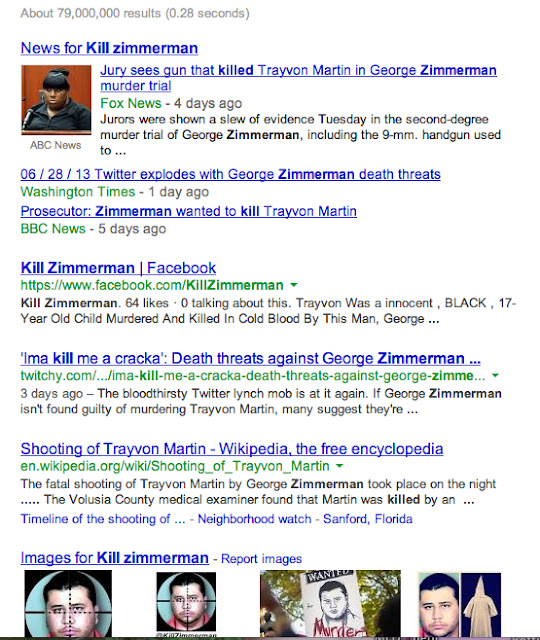 You certainly have more faith in the judicial system than I do. Mr Zimmerman was fully justified in shooting The thug. he was fully justified on following a suspicious thug. Those are the facts. If courts stuck to facts, OJ would be on California death row, and Deb Milke would never have been persecuted.
Some where, I lost my childish sense of innocense. GOD help us.