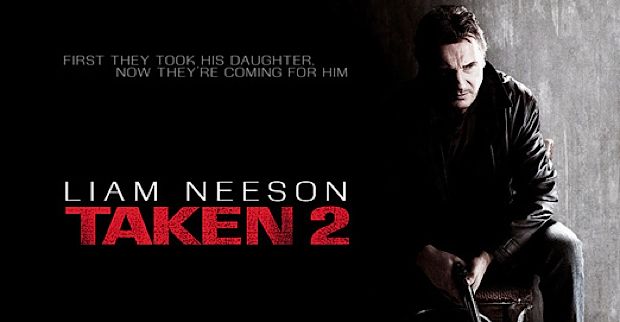 Los Angeles, CA—Taken 2 has hit the theater screens like lightening!  This action thriller stars Liam Neeson.   There are plenty of action film stars like Stallone, Willis, Norris, Segal, and Schwarzenegger however the difference here is that Neeson can act!
The Taken franchise is a simple one that began with Neeson, playing a CIA operative, Bryan Mills learned that his pretty daughter Kim, Played by Maggie Grace is kidnapped by terrorists in Paris.  Mills hunts down the bad boys and sends them to their makers and saves Kim.
This time in Taken 2, Mills’ ex-wife Lenore, played by Dutch born actress Famke Janssen is taken in Istanbul Turkey.  Most men would pray for their ex-wives to be taken and in fact many have actually arranged to have that happen.  However Mills is the exception because he still carries a torch for the wife he made second class to his government adventures and lost.
Lenore saw her vacation plans ruined by her present husband and Mills invites her and their daughter Kim to Istanbul where he was wrapping up a post-retirement  assignment.  It’s no surprise when all Hell breaks loose.  The excitement, great visuals and intrigue are non-stop.
Neeson has lots of stunt doubles but for a 60 year-old man he’s in incredible shape.  Neeson’s role is as physically demanding as they get.
I saw Taken 2 at an Imax monster screen theater and is was terrific.  The entire cast was believable in this improbable situation. The script penned by Luc Besson and Robert Kamen was wonderful and the director, Oliver Megaton pulled it off altogether making a sure-fire hit.
On a side note I got to spend a little time with Neeson at a screening of The Grey.  This was only the second time I saw him in person.  The other was nearly a decade ago when he played opposite Laura Linney in, The Crucible on Broadway.
There are two videos below.  One is the trailer and they other is from our meeting last Thursday night in West Hollywood.

The wife and I saw Taken 2 a few nights ago. Great movie and Neeson, as usual, was superb. I did notice a couple of times that his Ulster accent came through. Can't fault him for that, though. My grandparents came from a little town, Carnlough, which is a few miles from Neeson's hometown of Ballymena. They must have the strongest accents in the English speaking world. My grandfather came to Chicago when he was 21, died at 92, and never lost that accent.

I thought the first one was better.