Obama Has Reached The End of His Rope 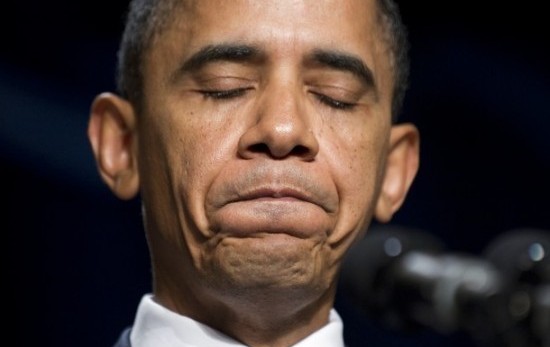 Denver, CO—The Presidential debate went South for Barack Obama right when he sidestepped and avoided a question about, “Trickle Down Government.”
Obama has become totally dependent on a teleprompter and obviously helpless without one.  Obama stuttered, stammered and repeated words to collect his thoughts during the 90-minute beating he received.  The more words that came out of Obama’s mouth the deeper he buried himself.
Obama’s problem has been aggravated by the media that has steadfastly refused to challenge him or is policies over the past four years. The media was unable to protect him in tonight’s debate.   Obama was just not used to answering tough questions.
Obama did not seem to have a platform or direction for the education of our children.
Obama lost the debate and the election tonight.  There is no way he can make a comeback from the abyss where he’s landed. The election is just a month away.
Mitt Romney scored points for exhibiting a much better understanding of the material covered in the debate.   Romney was clearly the better communicator of the two.
Obama has disappointed even his most ardent supporters tonight.
Posted by Paul Huebl Crimefile News at 10/03/2012 10:06:00 PM

Beware the "October Surprise" ... this sociopath and his queen will not go gently into retirement.

Unfortunately it does not matter what Obama does, over 90 percent of African Americans will vote for him and a lot of empty head liberals will also.

The recent Presidential debate was 90 minutes of the best comedy I've seen in years. Watching Obama squirm and sweat without his beloved teleprompter had me laughing and glued to the screen, knowing that millions of viewers were finally catching a glimpse behind the curtain, and realizing that Oz ain't as powerful as we were lead to believe all along. I can't wait for debate #2.