Spector Prosecutor Is No Match For Veteran Medical Examiner 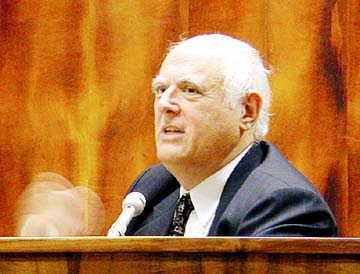 Former San Antonio Medical examiner, and book author, Dr. Vincent DiMaio, is an accomplished and incredibly bright man. He is also a defense witness hired by Phil Spector's defense team to examine, evaluate and deliver his findings to the empanelled jury. That’s been exactly what he’s been doing for the past two days.

Dr. DiMaio agrees with the L.A. Medical Examiner’s findings on Lana Clarkson’s cause of death. However the manner of death is where this renowned expert parts company with the L.A. pathologist. Dr. DiMaio produced some really top notch medical exhibits and demonstrated to the jury how Clarkson’s death was a simple, self-inflicted suicide.

The young and brash prosecutor, Alan Jackson was just not equipped or bright enough to match wits with the venerable Dr. DiMaio. Jackson could not contain his seething anger as he watched his prosecution theory fall apart so early in the trial. The obvious baiting of Dr. DiMaio by Jackson scored no points with the jury.

Mr. Jackson’s prosecution is all smoke and mirrors as his case is built on the really stale ramblings of disloyal and disgruntled former sexual conquests of the famed record producer. The fact is Phil Spector never injured or killed anyone in his 67 years on this earth.

When the physical evidence is added up along with a missing murder motive, suicide is the only reasonable answer to this mystery. The only thing that makes sense is Lana Clarkson who was both drunk (.12 blood alcohol content) and under the influence of narcotic pain killers, killed herself.

Lana Clarkson was 40, overweight at 160 pounds, in failing physical and mental health, addicted to both alcohol and drugs, flat broke when she was at the end of a unremarkable and uncertain acting career. Clarkson’s story is a heartbreaking tale of another life chewed up and spit out in Hollywood. In Hollywood dreams only come true sometimes.

Blaming Phil Spector and punishing him for Clarkson’s death is unreasonable and un-American.
Posted by Paul Huebl Crimefile News at 6/27/2007 08:32:00 PM

Everybody knows this guy is the best money can buy! He will make you a defense for a price, just like a menu in a hash joint. His "expert", paid for opinion comes with a payment check, the States M.E. findings do not. The State merely seeks the TRUTH & JUSTICE, while Spectors hired hand seeks getting him off at any price - including what's left of his tarnished reputation. Vincent is getting old and with social security checks entitleing him to eat dog food, he is for sale and Spector, whose trying to save his boney ass, is willing to give him the cash register to do it. Nice try Guy's but this old Copper is NOT buying this crap - it has a real bad odor to it - don't you agree? Get ready Philly baby t meet your new room mate "Big Willie" or "Salsa Gomez" and they both will widen your exit port to match your hair style.. And I for one can't wait for you to swing. That poor girl is talking to us from the grave saying - "get that bastard, he killed me for no reason".. The Old Copper

Spector has a new recording technique,its called The Wall of Cash.

"When the physical evidence is added up along with a missing murder motive, suicide is the only reasonable answer to this mystery."

You know Paul, you have made it clear that you think that Spector is innocent. I think he is guilty, but even so, I agree that he should be acquitted if there is "reasonable doubt". However, you seem to be 100% sure that Lana Clarkson committed suicide, even though that cannot be proven either. I wouldn't be so quick to blame her for killing herself unless it could be proven in a court of law. She deserves this as much as Phil Spector.