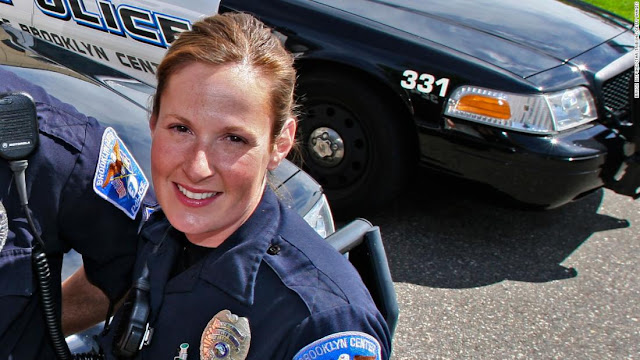 Brooklyn Center MN—Police officer, Kim Potter was a respected cop for 26 years.  Apparently she was an officer that very rarely used her police equipment, specifically guns and tasers.  She had no history of excessive force whatsoever.

The dead thug, Daunte Wight on the other hand had a substantial criminal history that included flight, failure to appear in court and violence against police.  The judge has precluded that very important evidence from being published to the jury.

Looking at the very poor condition of Potter’s utility belt to me it’s obvious she didn’t consider her weapons nearly as important than her verbal skills to defuse violent confrontations.

Suddenly when this wanted suspect pushed Potter aside and jumped in to his car in an effort to flee and simultaneously endanger her and fellow officers he was shot and killed.

This is really more about, Charles Darwin and not about excessive police force.

Kim potter chose mentally to use less than lethal force on that suspect.  In the very split seconds she drew her gun instead of the taser screaming the word taser three times as she was taught. However she had her Glock 9 mm in her hand fired one shot and was horrified to find out she did not have her taser in her hand.

The extremely corrupt and woke politicians then sought to crucify Officer Potter with a malicious Indictment simply to satisfy BLM and ANTIFA terrorists.

This was number one, accidental but number two at the same time it was a justifiable homicide. This woman should’ve never been charged with a crime and I believe she deserves to keep her job. It is so obvious that she suffered greatly from the very beginning until the present. As for the dead thug his history and his own criminal conduct is what killed him.  We shed far too may tears these days on un-redeemable thugs rather than their intended victims.

Apparently forgotten in this attempted crucifixion by defense lawyers is that both the taser and that Glock pistol are fired using a trigger and an index finger.  That actually makes understanding this as an accident and not a crime much easier!

Cops don’t look at what’s in their hands at such a close distance, instead they are watching their suspect and his hands. This is not the first time this kind of accident has happened. Perhaps it would be a better design if tasers were triggered perhaps by a thumb rather than an index finger. It might save a few lives along the way.

I hope that The jury understands and gives this woman the benefit of the doubt and that is indeed a reasonable doubt.  This should be a not guilty verdict.

It is my understanding that Officer Potter resigned however apparently the department was not willing to except her resignation so she may have a rare opportunity to return to work.  Of course she is eligible to receive her pension so she can simply retire and move on to a second career or simply enjoy her remaining years.

As a defense attorney, I can say Potter's defense attorney did a poor job. His direct should have been much more extensive. He asked leading questions that did not give her an opportunity to explain. He should have gone much more deeply into her lack of experience with the taser. She only pointed it twice - never firing it - and when cross-examined concerning the facts of both incidents, she was demonstrably confused. She should have been prepared by him to respond - he had the impeaching information. Also, some of her responses on cross seemed labored. She should have been prepared much better for cross. He should have put her through hours of mock cross with another attorney crossing her. Kyle Rittenhouse was a much better prepared witness. Also, jurors don't understand that - except for DUI cops - most law enforcement officers rarely testify. I have cross-examined 10 year veteran FBI agents who have never testified. I think police unions should hire the best private defense attorneys rather than using the usual police union lawyers.