A Film Review; The People Vs. Fritz Bauer 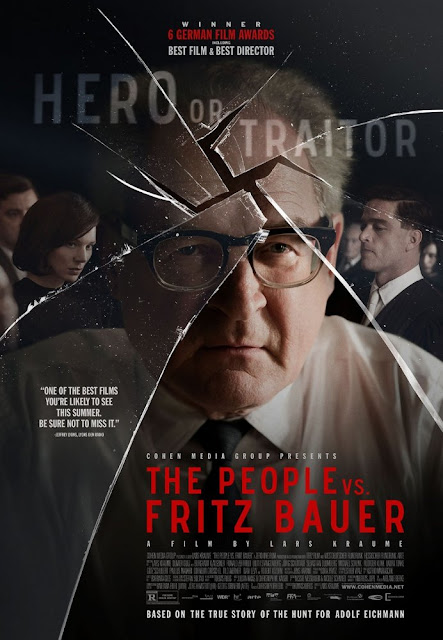 Los Angeles, CA—I heard the buzz about this German entry in the various film festivals.  It sounded very intriguing and something I should see.

When the Second World War ended Germany went about the business of cleansing the nation of the Nazi stains and war criminals. There were two competing German interests, one was the somewhat closeted but still committed Nazis within the government and the other was the mindset that this ugly chapter of history needed final burial.
Exacting justice for war criminals by the new Germany was really a half-hearted effort at best so soon after the war.  It was more about letting other nations do what they must to track and put the old Nazis on trial.

The three most hunted war fugitive Nazi criminals were Martin Bormann, Josef Mengele and Adolf Eichmann.  This amazing story about Adolf Eichmann’s capture was hidden by the German government for more that a decade.

The protagonist  here was a closeted Gay, German Jewish lawyer, Fritz Bauer. Bauer was a political activist before the war opposing the Nazis rise to power. When the Nazi’s gained control Bauer was arrested but somehow escaped the grim fate of so many other Jews. In 1935 Bauer emigrated to Denmark and later Sweden.  Bauer teamed up with Willie Brandt who would later emerge as Germany’s Chancellor.

Amazingly Bauer re-entered Germany as a prosecutor and judge in the Frankfurt/Hessen courts. He took up chasing the old nazis and became a pariah of the Nazi sympathizers. Bauer also fought long and hard for compensation for the victims of the Nazi regime while receiving constant death threats.

Bauer risked being arrested for treason by handing over information about Adolf Eichmann’s living a quiet and modest life in Argentina to Israeli Mossad agents.  Bauer knew that if he shared the information with German authorities that Eichmann would be tipped off and flee avoiding capture.

Bauer’s superiors tried to unsuccessfully manipulate and control Bauer by exposing his gay activities in Denmark.  Homosexual activity was a criminal offense at the time.

Angerman’s career becomes threatened when German intelligence agents produced compromising pictures of him and Victoria getting it on at her club.  That came after Bauer warned him to stay away from Victor/Victoria.

The film’s script came from Lars Kraume and Oliver Guez. The words on the page were brought to the screen in an excellent way under the direction of Lars Kraume.

This chapter in History deserved to see the light. Overall it’s a great film and a serious contender for the Oscars.  This is a film that definitely should not be missed

I had the distinct pleasure of meeting the incredibly talented star of this film, Burgart Klausner last year after he appeared in Bridge of Spies with Tom Hanks.