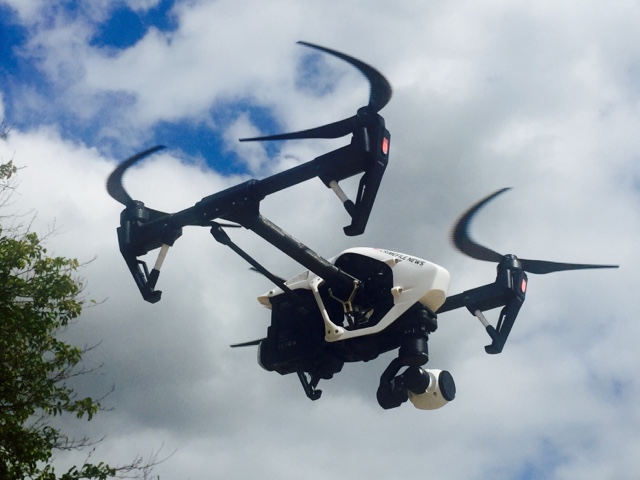 Los Angeles, CA--I had my somewhat pricy DJI Inspire 1 camera drone for five months.
I love the product and it never gave a bad moment.  Well not quite.
DJI has an update policy from Hell.  They suddenly announce a firmware update.  You can't fly until you get to good internet service with a computer, download and install the update.
That is a disaster when you drive to a location for a shoot and everything stops.
Okay that sucks but while attempting my last update for the cold weather battery fix things went to Hell.
The camera stopped retaining the little SD memory card spitting it out!
There suddenly was a second problem with the coupling of the camera and gimbal to the drone.  Contact was somehow lost.
Technical support was sympathetic and told me to take it to Fedex and provided several explicate pages of instructions on shipping it back.
The repair facility is in nearby Carson but they demand it be shipped by Fedex even if you are located across the street!  Same with the return!  Two full days are added to the repair time and DJI eats the unnecessary cost!
They fiddled with my drone and returned in in just over two weeks.  I put in the memory card without a hitch. However when I fired up the drone to move the landing gear for camera attachment it failed.
The ink was not dry yet on the FedEx receipt and I had a new problem!  After a 45 minute wait for technical support another sympathetic support agent quickly advised me it had to go back once again.
Thankfully I had another copy of my original sales receipt to put in the shipment or I be paying for the repairs!
Just to make thing interesting they give you a 25 digit number to write in several places that begins with RMA.  I'm sure only God can help you if you screw that up!
I know that everyone that crashes their DJI products blame the products for their own failures.  DJI must have a repair staff of people dealing with customers from Hell.
Both legitimate and bogus claims must be difficult to deal with.
My repair return is complicated further by travel issues. I must now have it shipped to an address somewhere else!
Yep, I got the DJI double repair whammy.  What's going to be my next DJI misadventure?
When it works I love it! When I'm in warranty jail I hate it.
There's got to be a better way!
Update:
I shipped the drone to DJI after the tech support guy said it needed to go back when the landing gear was apparently stuck in shipping position.
They returned the drone to me in Las Vegas and upon upon trying once again the landing gear wouldn't budge. I called tech support and was told to send it back again.
Suddenly it struck me that perhaps my radio controller was no longer coupled with the drone.  The lights went on in the tech support Guy's mind and he talked me through re-coupling and that was the issue. Now I can fly once more!
The tech support guy was not as sharp as he should have been.
Posted by Paul Huebl Crimefile News at 1/14/2016 06:51:00 PM