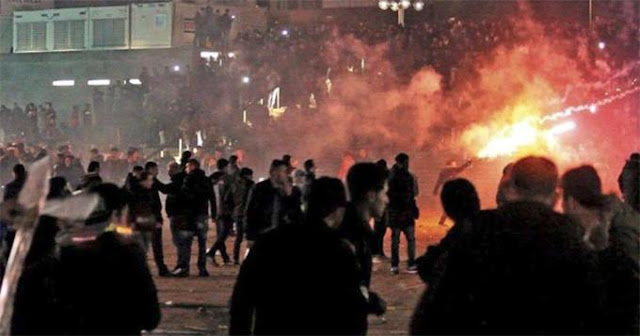 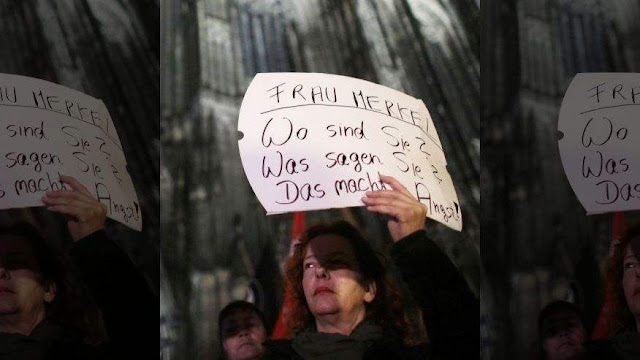 Cologne, Germany—An irreversible political decision was made under the guise of humanitarianism to bring in one million refugees from Islamic nations into Germany.  The political Left did this like they always do to bring in people they believe will keep a majority of poor so the Socialist political agenda is realized and maintained.

These predominately Islamic refugee immigrants cannot speak German or even English that’s widely spoken in Europe.  They have no job skills other than their cultural military killing related knowledge.  They hate the Western world, its culture, Christian religion and women’s rights.  With rare exceptions, these people can only survive from what they are given or forcibly take from the Europeans.


These Muslims are claiming that the suggestive clothing worn by German women is an excuse brutal rape and robbery.  The Islamists claim they can’t control their sexual impulsivity when women are not covered in Burkas.  Does anyone really buy that nonsense?
It was New Years and as always in the larger cities German people gather outside to celebrate.  The young women are bundled up in warm clothing that’s hardly suggestive because of those harsh winters.
This year was different because the crowds included large roving groups of newly arrived, primarily North African Islamic thugs that singled out young German women, surrounded them, ripped their clothing away, beat and gang raped them.  The women were also robbed of jewelry, cell phones, credit cards and cash. A night of planned fun became the worst night of these women’s lives.
The police were powerless to stop this depraved horror and investigating this after the fact in order to bring the thugs to justice is nearly impossible.  The Conservative anti-immigrant PEGIDA movement and some hateful Neo-Nazis accurately predicted this kind of conduct.  The government’s politicians did everything possible to mitigate and cover-up this massive immigrant organized atrocity.  Eventually however the cat was let out of the bag.
Now that hundreds of young German woman’s lives have been irrevocably shattered the German people are waking up that the PEGIDA movement needs massive support.  They know that Germany cannot absorb these savage and hateful parasites.  The quality of lives, property, and physical safety of the German people has been simply gambled away so the Left could maintain political control.
Making matters worse is that law-abiding Germans have no gun rights and few guns.  Understandably sales of those woefully ineffective pepper spray devices right now are through the roof.  The Muslims have already smuggled loads of military grade arms into Europe.   Of course when criminals and terrorists are involved gun control is no more effective than drug control.  Gun Control and the lack of training for Germans have placed them at the absolute mercy of Islamic thugs.
Wherever the Muslim refugees have been placed there have been massive reports of shoplifting, robbery and similar crimes.  The police cannot deal with this large scale mess.  As they evade arrest and punishment the Islamic thugs will only become more prolific and emboldened.
Germany must immediacy rethink gun control and look to every nation that allows permitted concealed weapons.  The statistics are very clear that those people behave themselves very well.
Germany must beef up law enforcement resources by bringing in trustworthy well-trained American military veterans to assist local police.  Being a veteran that was fortunate enough to serve in Germany I know we can work well together and better protect this nation.
The German people are learning a hard and violent lesson here.  The political Left has fooled them once again.  The refugee invaders are a clear and present danger to Germany.  Angela “Mutti” Merkel and her allies in Parliament’s political futures are now dead.
Immigration from these Islamic nations must cease and everything must be done to remove at least the criminal element, back where they came from.
The German people deserve the ability to be trained with and carry arms so they can be self-reliant.  Training must include the law and liability of the justifiable use of deadly force.
Germany must make it clear that any and all immigrants are accountable to laws.  They must behave as guests learn the language and work.  Immigrants that refuse to assimilate properly or behave must be expelled if Germany is to continue as a leading nation.
The German people have a greater than ever reputation for culture and kindness.  These are not the same people that allowed the Nazis to dictate for 12 years and watch their nation get destroyed.  Germany emerged as a new nation with heart, conscience and well-deserved pride.
Posted by Paul Huebl Crimefile News at 1/09/2016 08:13:00 AM

I was thinking of you Paul as you have lived in Germany and know the people,

and knew you would be upset by this news.

I am also upset by this news.

I also know Germany and some of the people.

Obama to the dangers of some

of those people from different cultures.

This is the "thanks" the Germans might get for being TOO kind.

It is a culture shock - although mistreating women, denying them degrees and jobs, and Sharia law can exist and does exist in other places like California. F

I wonder why would it take 50 American women so long to report Bill Cosby
if the system was not for the majority of the time - against those women - for reporting sexual assault!