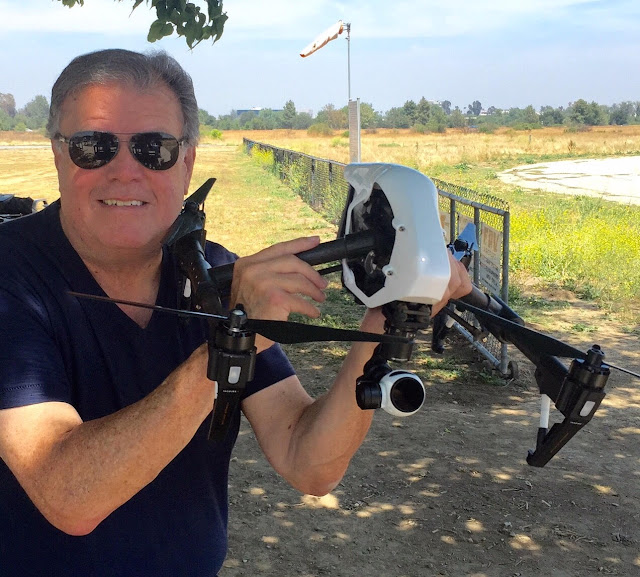 Van Nuys, CA—I’ve been hooked on camera drones for a while now and I very recently picked up a new addition to my five drone, air force.
My drone dealer of choice is Pirofliprc.com, which is also a brick and motor store located very close to the Apollo IX Model Aircraft Field between Van Nuys and Sherman Oaks.
This time it was the coveted DJI Inspire 1 with its dedicated 4K camera.  The Inspire I’s camera is distortion free unlike the GoPro cameras.  With the GoPro you can fix the distortion in postproduction but it’s a pain in the butt, at least for me.
The Inspire 1 camera will also shoot 12 megapixel stills.  Previously I simply grabbed a frame from the Go Pro camera.  I can control the camera from the controller so this is literally just a snap now.  A12 megapixel photograph is a lot richer than any video grab.
This is a great drone for two.  You simply use two controllers with two monitors.  The pilot operates the drone while the second operator can independently control every aspect of the camera.  This essentially frees the pilot to concentrate exclusively on flying.  Of course, a single pilot can handle both jobs alone but it’s a bit more challenging.  For a couple in love, operating the Inspire 1 would only be second to the bedroom for fun.
The Inspire 1 can travel 45 miles per hour and be operated from a motor vehicle.  You can program the drone to land exactly where it took off, or it can home in on the controller's location. If you’re moving in a boat or motor vehicle, that is imperative.
Following moving trains, vehicles, boats or horses from the air with the Inspire 1 can be easily be accomplished.  You're limited only to the 18 minute flight time and top speed of the drone.
The Inspire 1 is faster, more stable and larger than the DJI Phantom series.  Traveling with the inspire 1 on commercial airlines may be difficult if it won’t fit in some airline’s overhead bins.
The new DJI Phantom 3 drone costs only one third of the Inspire and is has most of the features including a similar camera.  Understandably for globetrotters the Phantom 3 may be a more practical choice.
My primary drone use among other things will be electronic newsgathering.  Somehow I managed to earn two aerial film credits on the IMDB (Internet Movie Database) so filmmaking is included.
The Inspire 1 controller has an HMDI connection socket that makes broadcasting a live video feed possible for television.
Both the Inspire 1 and the Phantom 3 have a built in capability to stream live video to YouTube.  You simply give your live feed video link to your intended audience members and they can see your flight live from anywhere on the globe!
The application uses the microphone on your smartphone or tablet.  That enables the pilot to talk to his or her audience during the live flight.  Of course once the flight is over the video stays on YouTube like any other upload.
I’m still getting familiar with my Inspire and I hope to put many videos up very soon.
Posted by Paul Huebl Crimefile News at 6/16/2015 01:44:00 AM

Thanks for the link Paul.
I enjoyed the story...looking forward to some new videos.