Feeling Like You’re being watched Lately? Yes, You Are! 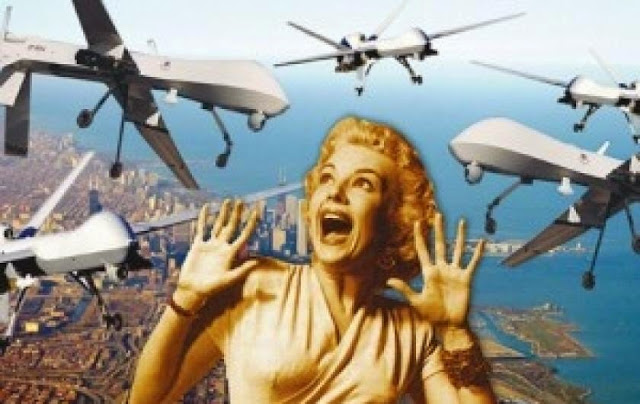 Town of Paradise Valley, AZ—If you don’t like cameras pointed at you, you'd better learn to smile.  They are here to stay watching, documenting and exposing all of your public behavior to the world.
With the new consumer camera drone technology the camera shy folks are in paranoia overdrive.  These people seem to have forgotten that cameras are watching them 24/7 everywhere.
From the time you leave your front door until you return cameras are constantly watching you.  Some you can see and there are many others you can’t.
For example if you enter the Town of Paradise Valley, Arizona in a vehicle a camera concealed in a cactus grabs the license plate number. It’s placed in a searchable database that allows the town government to know each vehicle’s exact movements.
There are live cameras capturing and saving video everywhere.  Some store video for a short time others keep video indefinitely only limited by the size of their hard drives.
From the time you enter retail stores and their parking lots until leave there is a full video record all of your visit.
Your neighbor’s home security cameras are easily pointed at your driveway documenting your activities.  Those cameras can be both overtly visible or covert and unseen.
The reality is that if you’re in a place outside your own home that can be seen and photographed from any angle. Your backyard swimming pool is no sacred refuge.
Satellites, fixed wing airplanes and occasionally helicopters, are constantly photographing the outside of your home from the sky.
When I investigate crimes I make every effort to look for and ask about surveillance cameras.  You can nearly always find cameras that have captured at least a portion of most serious crimes.  Of course I must get to the camera’s owner before the hard drive begins to record over the earlier video.
Today you can’t watch a local news broadcast on TV without seeing samples of this video.  Remember you only see the crappy video where the characters are not readily identified.
There is hardly a murder case anymore where clear video does not become evidence that prosecutors can use either to coerce a plea deal or enter at a trial.
If you've picked your nose in public I promise you that some camera has captured that image.
Right now there are millions of illicit cameras in hotels, motels apartment building’s bath and shower rooms.  Today the infamous character Norman Bates from the film “Psycho” would be watching his undressed guests in high definition on large monitors or on his smartphone screen.
Speaking of smartphones, we all now have high definition video cameras in our pockets!  At the first sign of something unusual happening the cameras are out of the pockets!  There is no escape from the unblinking camera lenses!
Sorry folks the Genie is long out of the bottle and like it or not, you’re on candid camera.
As for the little consumer drones that may occasionally fly over your home are really inconsequential when you look at the big picture.
Posted by Paul Huebl Crimefile News at 6/10/2015 08:53:00 AM

Of course there's also the FBI and the DEA but, yeah, I agree, "Paradise" Valley is the worst. (http://hosted.ap.org/dynamic/stories/U/US_FBI_SURVEILLANCE_FLIGHTS?SITE=VACHA&SECTION=HOME&TEMPLATE=DEFAULT)

Thought you might like this if you haven't seen it already. Drones, as you've pointed out, are changing journalism, but they seem to be game changers in other industries as well. https://ssl.www8.hp.com/hpmatter/issue-no-5-summer-2015-idea-economy/drones-are-becoming-oil-industrys-guardian-angels