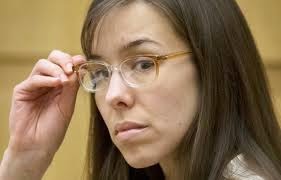 Phoenix, AZ—The second attempt to get a verdict in the penalty phase of the Jodi Arias murder trial is about be get underway before Judge Sherry Stephens. Will it be death, life without parole or a 25 calendar year sentence?   Arias would get full credit for her years in pretrial custody.
Arias is understandably and desperately seeking some control over her defense and public relations matters.  The problem is that she’s woefully unqualified to make any of those decisions.
The lawyers assigned to defend Arias are not exactly heavy hitters.  They are lightweights with limited skills and resources.
Arias has been widely criticized for her missteps at every turn.  This young woman is fighting for her life while dealing with complicated issues few of us will ever have to face. For her there are no right answers.  Whatever she does turns out wrong.
The only thing I know about Arias for sure is she has given substantially different versions of whatever happened in that Mesa, AZ home. I’ve learned long ago that people that use legitimate and lawful deadly force in self-defense far too often lie to authorities because they think it’s somehow necessary.
The simple truth is if Arias had invoked her right to remain silent and simply refused to answer police questions she would have probably never been arrested.  In any event she’d be a free woman today.
People that have never walked in this Arias’ shoes are the first to castigate her.
Judge Stephens wisely booted the Media’s cameras out of the courtroom for the second penalty phase.  The actual murder trial that ended in conviction was as ugly as any court/media circus in American history. Perhaps this time the jury can do their jobs with less outside influence.
Protecting un-sequestered jurors from published material and videos is absolutely impossible in this day and age.  Judges have to take special precautions to prevent the court’s evidence from being co-mingled with Internet gossip.
Frankly the courts have been incredibly negligent beyond giving jurors redundant but meaningless admonishments to avoid such material.
Under the media's radar, this case has had lawyers arguing and litigating under court seal since this sensational trial ended.  In my decades of courtroom and criminal justice experience I’ve seen nothing like this.
My trusted Phoenix court sources have told me the protracted secret fight is over a “new” witness and evidence that was not considered at the first trial. This has nothing to do with the penalty phase but in fact what may actually lead to a new trial that may yet clear Arias.
This case has drawn an astronomical number of vocal trolls that have consistently spread anti-Arias hate and venom.  These trolls all claim to have watched the whole trial and know everything.
What these trolls are clueless about are the hours of the trial that they have never seen!  That was the numerous fights over evidence and admissibility in Judge Stephens’ chambers where the press, their cameras and public was excluded.

I hear the trolls say, "But she stabbed him so many times!"  What people don't realize is that few of these wounds were mortal.  The human body is so amazing that it will continue to fight to survive.

A somewhat frail woman realistically would have to stab a stronger male numerous tines before he would begin to weaken or expire. Superficial wounds inflicted by a weaker female would do little but invite more aggression from a stronger male.
The Arias case is sure to take many more surprising turns before it is over.
I’m convinced that ultimately there may be enough prosecutorial and judicial misconduct in the Arias case to reverse any conviction and prevent a retrial.  I would not count out the real possibility that Arias may be freed before the litigation is over.