Are $8.00 McRib Mystery Meat Sandwiches and Pink Slimeburgers in your future? 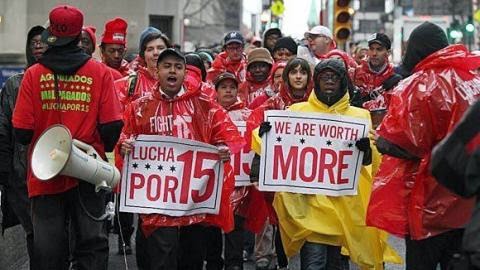 Chicago, IL—Those fast food workers seeking unionization and a $15.00 per hour minimum wage are incredibly delusional.  Frankly if they were smart enough to figure out the folly of the efforts they’d not be working in fast food!
Fast food appeals to Americans because it’s cheap and fast.  Unionization will kill this necessary industry along with the jobs and some needed training workers are currently enjoying.
Flipping burgers was never meant to be a career but a stepping-stone.  Getting a job at one of the many fast food chains is suited for young people just starting out in the workforce.
These jobs may also suitable for some retirees supplementing social security and to stay useful in declining years.  An entry-level job in fast food is anything but a suitable career goal.
If burger flippers were paid as skilled workers they would never have incentive to learn and move on to become more valuable to our workforce.
Let’s talk about the fast food products.  Fast food is generally minimally acceptable for healthy diets.  This is the rock bottom of nutrition.  Pink slime and pressed mystery meat processing has made unsalable meat products somewhat acceptable at least in looks.  In the end most of it's really crap.
Our nation has rapidly declined and is spiraling into joining the Third World.  A $15.00 per hour minimum wage will certainly kill jobs along with important incentive for workers to gain better skills.
The poverty that fast food workers complain about is exactly why fast food is popular.   The poor cannot afford to eat at the sit-down restaurants where burgers are better and cost $8.00.
Even our middle class has to settle for cheap meals at least part of the time.  Paying for the kid’s braces or gas for the car means more visits to the Taco-Bell for meals.
If the demands of some fast food workers are met they will actually suffer more than ever.  Not only will their employers shut down but also they will no longer have meals they can afford.
In the end it will be fast food workers that suffer the most with a boost in the minimum wage.

Their all going to be replaced by robots soon many other jobs too.

Tell your children to learn how to fix robots.

Chicago: the nation's premier liberal stronghold, always in the running for murder capital of the US, training ground for community-organizer/POTUS Barack Hussein Obama & now "managed" by former BHO sidekick, "godfather" Emanuel. I agree that with $15/hour minimum wage mechanization will follow & no "good" will result to the overall employment picture, living conditions, etc., just a greater take for unions. I would argue that the government leaches have no business setting a minimum wage at all; eliminate it altogether! I'm wondering if we know who organized these protesters and provided signs, T-shirts, and printed rain slicks?

"The Machine" will come in the form of a smartphone app. The only human interaction will be that of someone handing the customer a bag.

Don't you think for a minute that this isn't want those San Fran libs who own stock in all those tech companies want.

It's all about control. Think about it.