Have I Got a New TV Series For You! 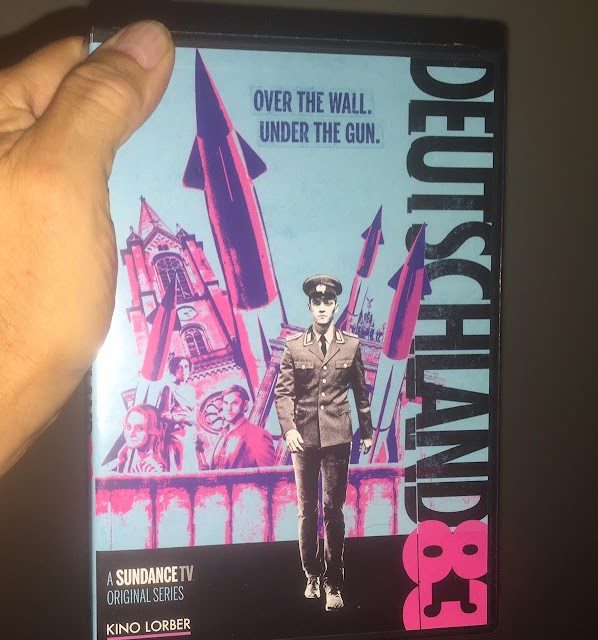 Los Angeles, CA—I was invited by an Austrian actor friend, Thomas Mikusz to a screening at the Goethe Institute here.  He was moderating the Q&A of German film Director Edward Berger (of the film, JACK) and music director Reinhold Heil.  Ive been watching this exciting series that now has me absolutely spellbound!  The writing is top notch.  It’s a Sundance-TV original series.  Sounds American, right?  No!
It’s Called, DEUTSCHLAND 83 a cold war thriller about the East German Stazi Intelligence and the very hot cold war before Communism as we knew it fell.
Interestingly enough this was released here first.  Germany will have to wait until next month to see this!
In an age of reality TV garbage and sensational but mindless, over the top special effect films, this is a wonderful story and character driven series.  Yes, terrific actors actually bring the written words to life off the pages of a marvelous script by Anna Winger.  She and Jorg Winger created this masterpiece of entertainment.
This was produced by the same people that brought the Emmy Winning Mini-Series called GENERATION WAR about a group of attractive young friends that agreed as World War Two began to meet in the same café at the war’s end.  Those that met after the war had dramatically changed and challenged lives.  I wrote about that series on this blog.
As for DEUTSCHLAND 83 it’s a story of two sisters, one a loyal GDR Stazi official (Maria Schrader) and the other (Carina N. Wiese) a freedom-loving captive who is stuck in a place she’d rather not be.  That sister has a life-threating kidney problems and a young son (Jonas Nay) serving in the military as a somewhat low level border guard.
Family dynamics are pushed into an untenable and tyrannical situation where our young border guard is forced into being a Stazi spy because of his aunt’s extortionate demands.
The plot takes viewers to the War Rooms of the GDR and NATO headquarters.  During the period high-level military officials made strategic plans to attack and defend using nuclear weapons.  Our young border guard finds himself forced way out of his comfort zone to capture or copy documents.  Getting caught by the West had far fewer consequences then failing the GDR and Stazi.
Then there are the complicated ladies in our unlikely border guard-hero’s life.   No, I wont spoil it for you!
It’s filmed in various German locations including the actual former East German Stazi headquarters. It’s loaded with excellent costumes and props from the period.
Yes, it is in German and is subtitled in English.  By the way my friend Thomas sent me home with a set of DVD’s for the first season!  Now that’s what friends are for!
You can see this series on iTunes and other popular American film sharing services.
Posted by Paul Huebl Crimefile News at 10/10/2015 02:35:00 PM