What I’ve Learned So Far About the UCLA Coed’s Murder Case. Los Angeles, CA—I took an early interest in the case because of my closeness to past and present UCLA students and alumni.
It was about 7:00 AM when LAFD emergency vehicles came screaming to the Scene midblock at 10900 Roebling adjacent to the UCLA Campus.
It was a lucky break that some of the students there were awakened by screams and fellow residents were up trying to combat the fire with a fire extinguisher on the first floor, Eastern side of the complex.
That was the residence of UCLA Spanish and Psychology major, Andrea “Andy” DelVesco.   Andy was an active member of the Pi Beta Phi Sorority.
Some of the more observant kids present were able to tell the firemen that Andy was unaccounted for and they began an aggressive search.  They found Andy badly burned and beyond all medical aid.  Some 30 firefighters were able to contain the blaze within ten minutes.
Thankfully no others suffered injuries considering this was early when the complex residents would normally be asleep.  Without early discovery by neighbors and and LAFD intervention this could have been a tragic holocaust.
Soon UCLA police and members of the LAPD determined that this was an arson fire that was set to cover up a murder.  Ignorant criminals often believe setting their crime scenes on fire will destroy evidence and make detection more difficult.  More often this creates even more evidence that will snare the criminals.  This would prove to be one of those cases.

Police quickly notified Andy’s parents, Art and Leslie DelVesco in Austin, TX.  They wasted no time, jumping on the next flight to L.A.  I can’t imagine the horror they are still reeling from and the devastation to their close-knit family.
Police did what cops do these days.  They quickly learned about the recent felony drug possession for sale arrest of Andy and discovered she was cooperating with authorities to curry favor possibly evading a ruined life with a felony conviction and prison term.
It’s obvious to me that the arresting agency (UCLA Police Department) dropped the ball badly here and failed to protect their indentured informant.
Police also obtained Andy’s computer and cellphone.  They’d also get search warrants to capture every possible communication records from her ISP, Email and phone providers.  That of course gave them a shopping list of potential suspects to investigate.
Once they zeroed in on obvious involved characters their cell phone and emails would be captured via search warrants and analyzed too.
Police released the crime scene on September 21.  However curiously on the afternoon of the 23rd they returned with a search warrant spending the next 30 hours sifting through the debris for evidence.
On September 27 police got a break in the case that gave them probable cause to arrest 22 year-old Alberto Medina who is a pre-psychology and social work major at Fresno State University. That also gave police the ability to obtain search warrants for his cars and residences.  Fresno police acting on a request from the LAPD took Medina down and into custody during a felony stop on the street without incident.
It was learned that Medina was a Member go the Lambada Chi Alpha Fraternity but was expelled over some bad behavior.

That in turn led police back to the Westwood UCLA Campus.  On the evening of September 27 an LAPD SWAT team raided the nearby Strathmore Regency Apartments arresting 22 year-old Eric Marques for murder too. Needless to say they used a search warrant to locate and seize evidence from his apartment.
Like Andy and Alberto Medina, Eric Marquez had a promising future.  He was a pre-med biology UCLA student.
On September 28, police felt they could announce their arrests to the media without comprising the investigation.
What remains to be told is more about the motive and the various informants and witnesses that were involved. One life senselessly snuffed out and two others that will unlikely ever taste their freedom again.
Because of the nature of the kinds of drugs seized from Andy by police last June it’s apparent at least to me that the drug ring was catering to Rave Festivals and such.
I have to ask when will we learn that the Drug War and the huge profits it generates are far more evil than the drugs themselves.  How many more lives will be lost or destroyed before we understand treating the addicted is far cheaper and better than the constant violence the Drug Was creates?
In the meantime we will be waiting and watching as this nightmare unfolds in a Los Angeles courtroom. 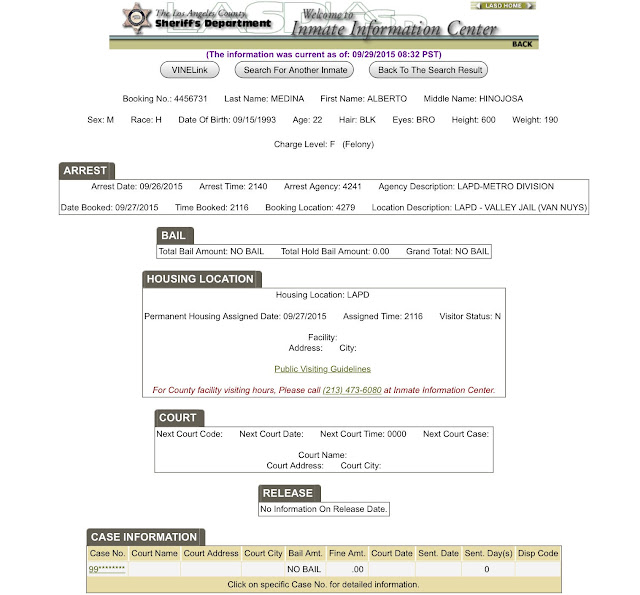 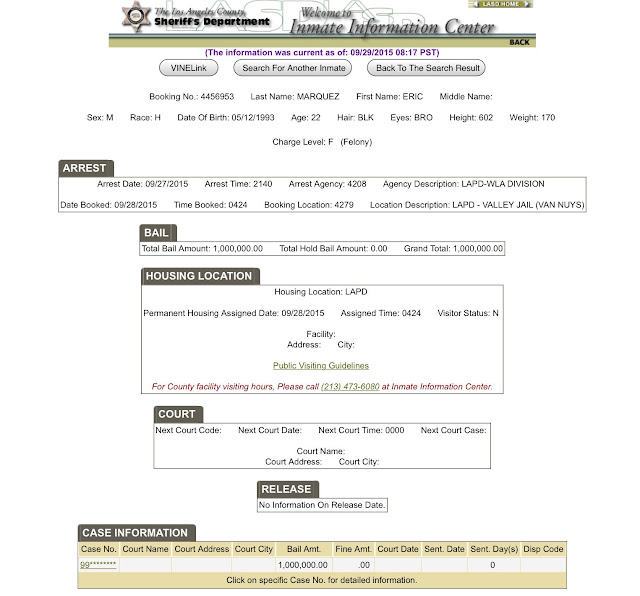