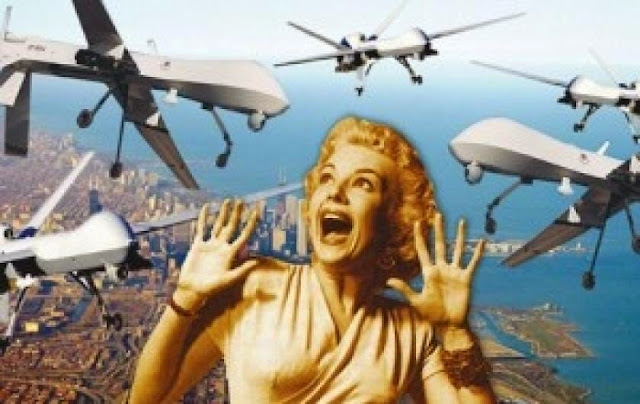 Los Angeles, CA—The explosion of civilian multi-rotor camera drones is just beginning.  People are reacting to seeing them for the first time.
My experiences with the public seeing my drones in action has been mixed.  Thankfully the vast majority of people are amazed and they enjoy seeing them fly.
A minority of “drone detractors” react with exhibitions of hostility, hatred and ignorance.  In the last two years I’ve had just a scant few unsettling encounters while flying my drone.
For reasons I don’t understand I’ve been only been confronted by women.  They advise me I’m breaking the law, and then they call or threaten to call the cops.  They obviously don’t know the law.
I usually ignore them, shoot my video and leave the area when my flight is over.  If the cops respond to their call I don’t know because I’ve always moved on prior to their arrival.
Three women on separate occasions were downright nasty and even emotionally disturbed.
I’ve never been negatively confronted by police and have sent my drone into the air in front of them.  The cops seem to be curious and enjoy learning about them.
I have no clue what drove these women’s nastiness and anger.  Taking a friendly approach never helps and responding with similar hostility is pointless and counter-productive.
Moving to another location in one case was little help as one woman jumped in her car and actually followed me!
It’s obvious these women are clueless of why we send our drones up or that they are safe and not invading their privacy.   I’m really proud of the videos I uploaded to YouTube and simply want the world to see just how much fun I have while capturing the stunning images.
The civilian camera drones are here to stay.  Our First Amendment right to use them to capture images, trumps those hastily passed laws along with attempted future legislation outlawing them.
The safety record of the civilian multi-rotor drones is unblemished despite the two million already in the hands of civilians.
I have a habit of sending my drone up in the early morning hours avoiding potential busybodies that might take exception to my drone.  I also position my controller and drone behind my car to shield my activities from strangers.
We must remain polite, friendly and civil even when people become nasty.  I’d rather make friends than enemies out of anyone.  I will continue to take the high road with anyone hostile to my drones
Posted by Paul Huebl Crimefile News at 5/19/2015 08:11:00 PM

You can't fault those women. They are obviously suffering from estrogen poisoning.