The Media Canonization of A Predatory Mutant Monster 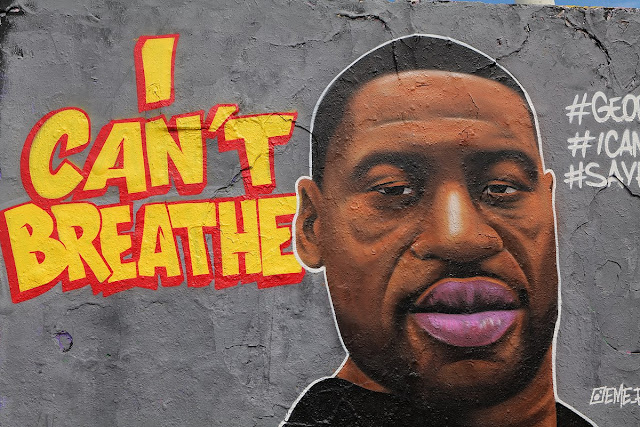 The Media Canonization of A Predatory Mutant Monster

The Nazi Minister of Propaganda and Enlightenment, Josef Goebbels, said it best, if you tell a lie often enough it will become the truth.  Most of us laugh that off thinking we are above that kind of influence.  Advertisers, journalists and experienced politicians all know this is a fact.

George Floyd was a bully, armed robber, police fighter and general monster.  He used a gun pointed to a pregnant woman’s stomach as he put his hands inside the woman's bra forcibly taking the $800.00, she had to pay her rent.

Who could possibly think of a more cowardly act than that vicious crime committed by this very large, muscular ape like thug?

Floyd was a drug addict, with a history of abusing every illicit drug available including the very deadly fentanyl.

Floyd used a poorly made counterfeit $20 bill to make a purchase at a local store. The manager did not take kindly to this deceptive crime and called the police. Arriving to the scene were four cops including Derrick Chauvin.

The officers conducted a quick investigation and had probable cause to arrest Floyd who was on probation and knew he’d be going back to prison.  Floyd knew that if he could break away, he might be able to hide out for a while and continue with his drug addiction.

Officer Chauvin and the three other rookie cops began to take Floyd into custody however Floyd would have none of it and fought vigorously complaining that he could not breathe and that he was claustrophobic.  Those were both absolute lies because Floyd was simply being removed from one automobile to another and it is impossible to talk if your oxygen is cut off.  After much fighting the officers were finally able to get their handcuffs on Floyd but they still couldn't get him into the police vehicle, and he wound up on the ground. Floyd was every bit a serious threat to the safety and lives of the officers.  While Floyd was on the ground, he had to be kept still and officer chauvin put his knee on the shoulders and head of Floyd. Floyd had calmed down, but was he playing possum?

While this was going on a small mob of Passersby began to yell and insult the police. Not only did the officers have to worry about Floyd but the possible imminent assault by people interfering with the arrest.  They called for an ambulance and Chauvin continued to hold Floyd down four some nine minutes.  and he died in connection with his highly toxic fentanyl and affixation.

One could certainly blame George Floyd for his own death and there was an additional person involved by the name of Charles Darwin.  George Floyd was a classic example of a human that was unfit to live.

Soon the shrill voices of the race baiters like the Reverend, Al Sharpton and that bottom feeding lawyer, Benjamin Crump.  The race card was in full play and the media begin to demonize the police and at the same time canonizing George Floyd as a Saint.

As unbelievable as it sounds George Floyd was given a solid gold coffin, three separate televised funerals fit for royalty and soon memorial murals appeared all over the United States bearing Saint George Floyd who is now the patron Saint of Fentanyl.

I'm sure soon they will be naming schools and streets after this despicable creature.  George Floyd should be the last person that any child should look up to as a hero or civil rights icon.

In the year that it took to try officer chauvin and the three other rookie cops the media screamed over and over that George Floyd was a victim who died at the hands of brutal cops that deliberately murdered him.  They used every buzzword they could and redundantly sang the misleading chorus with that infamous, nine-minute line.

The Fake News Media had completely succeeded in brainwashing most of our population, the jury and anyone within earshot with the lie claiming George Floyd was murdered by police.  In the end it was obvious that Josef Goebbels was correct in his assessment about repeated lies.