Hitler's Hollywood, A Look at the Documentary Film 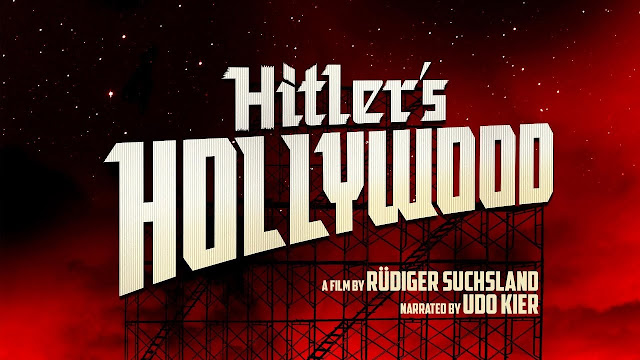 Hitler’s Hollywood, is a a documentary film about how Joseph Goebbels reinvented Hollywood film making for the Third Reich.

After completely cleansing Jews out of filmmaking, Goebbels used the relatively new media of talkie films to legitimize anti-Semitism and euthanasia as he glorified the concept of people sacrificing their own lives for the honor of the Third Reich.

Goebbels was able to oversee the subtle mixture of entertainment, art and propaganda to indoctrinate Germany and soon all of Europe.

There was no television during the Nazi administration 1933-1945 so attending your local movie house was your only option for seeing films.

Before you could enjoy the Nazi entertainment film at your local theaters they’d show a newsreel (Fake News) film.  There were potentially serious consequences for those movie goers that came to movie houses purposly late avoiding the newsreels. That was seen as a form of resistance by the Nazis.

This mixture of entertainment, art and indoctrination was not lost on our own Hollywood.  They later used films to legitimize homosexuality, gender confusion along with various societal and politically unAmerican aberrations.

As we enter the age of YouTube and citizen journalism the mixture of entertainment and diverse propaganda is now in its own Renaissance Period.  Today nearly anyone can create video Media to promote whatever they please.

Free speech is all about diversity of opinion.   The efforts to control and censor video content has become a hot button in our new media society.  It’s all fun until others want to silence your voice or content.

As for this Documentary film, Hitler’s Hollywood, the grand and nefarious scheme of creating and shaping popular public opinion is laid out for all to see.  Below is the trailer.