Is There Really a Sudden Fake News Epidemic or has Democracy Finally Come to Journalism? 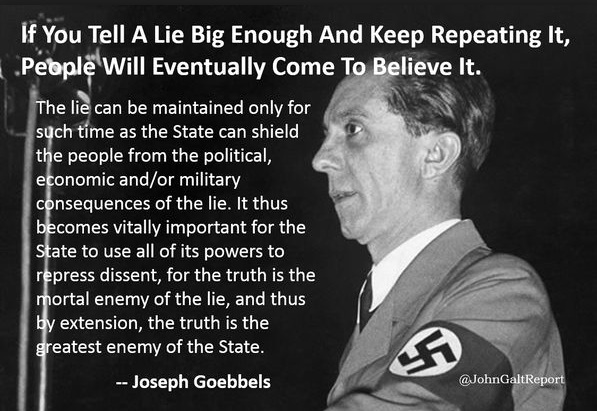 Los Angeles, CA—The father of broadcast Fake News is Josef Goebbels.  As Adolf Hitler’s Minister of Enlightenment  and Propaganda, he was a pure genius.  Goebbels convinced the entire nation of Germany that what they heard on their newly acquired radios was always absolutely true.
Goebbels success was not lost on our own CIA, back then called, OSS.  The OSS learned of the amazing power of the radio and soon Franklin Roosevelt was broadcasting propaganda “Fireside Chats” that mesmerized our entire nation binding us together against Germany, Italy and Japan.

In the last 150 years we had powerful newspapers and soon followed radio and television.  I don’t give a rat’s ass who the news provider may be, they all have their own secret and vested interests that they are selling to the public as news.

Only the very richest Americans could own newspapers and broadcasting organizations.  We the people were never part of the powerful media.

Reporters and producers are hired based on the ability to craft news stories but also subject to their employer’s political proclivities.  There were once some Conservative newspapers but they all sold out to the wealthy political Left.

There are no serious mainstream Conservative news organizations around anymore. Conservatives need not apply for media jobs today unless they can hide their political leanings really well.

The six corporations that own and operate what we call today, The “Mainstream Media” are Leftist and in editorial lockstep together as one. What they’ve expertly been putting out as news is carefully crafted propaganda.

Since all the news organizations are in agreement on various issues the public is convinced our media giants must be telling the truth.

The Mainstream Media honchos all understandably thrive on deals and corruption to make their personal wealth and power grow.  They could care less about their audience/readers or their real needs.  They have very human failings at every level.

It’s been said may times that, “He who controls the information can rule the world.”  Recently that control has now somewhat shifted to, we the people!

Suddenly we have the Internet that can transmit text, pictures and high quality video along with affordable equipment that allows anyone to offer up what they call news!

Slowly citizen journalists, bloggers and podcasters have cropped up by the thousands! Accordingly the newspapers and news broadcasters began to fail big-time!  Pink slips have rained in everyone of the nation’s Mainstream Media newsrooms.

Some of the Internet news providers are not so clever or capable of crafting propaganda into their offerings subtilely.  Some are reckless and some are absolute abominations. However, now matter how well you can tell a lie or mislead an audience it’s no less deceitful or evil.

Lack of experience and education has hampered many Internet journalists who have made somewhat clumsy attempts to sway public opinion.  That too will change as they gain necessary skills.

Adding to the news mess is Twitter, Facebook and a growing list of places where any troll can put up a somewhat convincing “news” item. The problem is people want to believe some of the crap that is maliciously published and don’t bother to check anything out.

If that’s not enough confusion there are fact checking websites that have their own political agenda and facts are turned into fiction and vise versa.  The only real way to check facts are to actually interview the newsmakers and require they provide reasonable evidence backing their statements.

Are we somehow in a worse position now than before the Internet News sources?  No, we are better off because there are trusted bloggers and sincere journalists uncovering lies by government and politicians. Wikileaks, Edward Snowden and Bradley “Chelsea” Manning have been able to expose government tyranny and some really outrageous political intrigue.

Whistle blowers now have real options that never existed before. Yes, despite the longstanding existence of fake news we are slowly becoming more sophisticated and better informed.

I think we've seen the last Presidential election where the dying Mainstream Media will be able to maintain any relevance whatsoever.  They shamelessly fawned all over Hillary Clinton and padded the pre-election polls in her favor.  That came for them with a severe price.

Let me end this with a simple truth, every writer has an agenda and the First Amendment thankfully protects that short of Libelous publishing or broadcasting.  Only the government gets to lie without punishment but at least now we can expose the crap they dish out.  Democracy has finally come to journalism!

There are lots of qualified people that can gather and report news.  There are more people than ever that can podcast or post video news packages on the Internet.  There is no better time than now to make an Internet news channel of your own.