I'm Warming Up To Donald Trump! 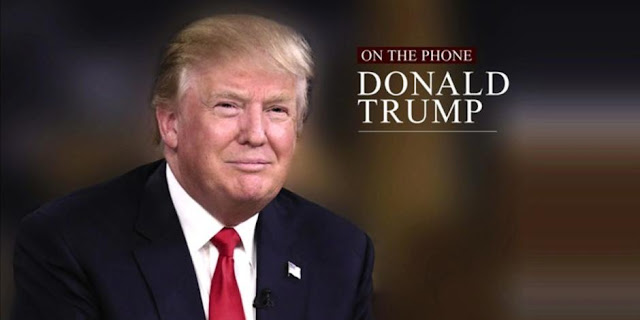 Washington, DC--Donald Trump has given us  some strong lip service to his support of traditional Conservative causes.  Immigration Enforcement, Gun Rights, are two of the biggest issues where the GOP has faltered.  Wether the traditionally Liberal Trump has really turned around still remains to be seen.  The words coming from his mouth are the ones I want to hear.

I'm an Army veteran.  I was drafted and trained to kill Communists.  Today Communists are running our government. The sad truth is that the Communists have taken over our government decades ago and our Constitution is on the ropes.

With Trump's amazing success in the Primary elections the leadership faction of the GOP is in a major  panic.  The GOP leadership has been nearly 100% RINO pretenders.  Since Ronald Reagan left office they have put up increasingly Liberal losers that have long ago abandoned Conservative voters like me.  I have not voted in a Presidential election since Reagan!  I refuse to vote for the Left leaning pretenders offered by the party.  I feel that the lesser of two evils is still evil!

Now I'm watching the GOP whiners fighting for their political control and lives.  They don't give a rat's ass about what the voters want.  This is really about controlling massive power by an institutionally corrupt GOP Mafia. The Lindsey Grahams, John McCains, Mit Romneys or anyone with the last name of Bush should consider retirement or even suicide.

I have serious suspicion about Trump keeping his political promises. However, we know only too well what the GOP leadership is all about.

When the political Left and GOP RINOs have become so united in their quest to destroy Trump I'm convinced he is the last hope for America's Conservative voters.

I'm taking a chance to support Trump for President.  If Trump will just accomplish half of what he says he wants for our nation we will be  safe, prosperous and self-reliance will return to the population.    If not, all but government officials and contractors will be slaves to the false promise of Socialism.
Posted by Paul Huebl Crimefile News at 5/06/2016 07:17:00 PM

This pretty much sums up my disappointment with the Republican leadership. They keep putting up weak, or RINO candidates, such as John McCain and Mitt Romney. Every election cycle, I've had to hold my nose and vote for one of their picks, and the last one, Romney actually said, following his loss: "Well, I didn't want to be president, anyway". Newt Gingrich was a candidate that year; I thought him far the better candidate, but again, the RNC served up weak sister, Romney, with the ghost of Bain Capital following him around. So, we got another 4 years of the traitorous muslim Liar-in-Chief. And he has continued nonstop on his mission to destroy America. Now, finally, FINALLY, we get a candidate who is saying the kinds of things I want to hear. And all I hear from the RNC is how much they want to conspire to beat Donald Trump, their own guy.

I wrote to Paul Ryan to tell him that it isn't up to him to co-sign the peoples' choice of a new leader. The people have chosen Mr. Trump. And I frankly resent his constant efforts to defeat Mr. Trump, including inciting Ted Cruz and John Kasich to conspire to throw various races, for the obvious reason to stop Donald Trump. I once thought highly of Ted Cruz, but by such things as his underhanded theft of Dr. Ben Carson’s support, in the Iowa elections, he has revealed himself to be dishonorable, as well as a whiny sore loser. I also believe that Mr. Cruz, not by the accident of his Canadian birth, but by the fact that his Father, Rafael, is a Cuban national, the “Natural Born” requirement of our Constitution bars him from running for President. It also bars Obama, but he--another liar--has managed, with the help of the democrat party, and a compliant media, and legal system, managed to bury that fact, and keep it and virtually all other details of his life, covered up. So, he, along with all who conspired with him, was a Traitor, from Day One.

Mr. Trump, on the other hand, has shown himself to be a bold, decisive innovator, with the skills and the desire to repair the damage that the traitor Obama has done. He says the things I want to hear, from a presidential candidate. He speaks for me.

The sheep(voters)in this country have put into power some of the worst scumbags in modern times and like you I didn't vote for any of the these lowlife offerings trotted out to us by the powers that be. As you say, if Trump keeps half of his promises we stand a chance to reverse the descent that Obama and his elk have perpetrated on the US citizens. People need to realize that our best interests are not on the Governments agenda, when our freedom is finally taken away from us they have achieved there goal in the pursuit of enslaving the U.S. citizens. No constitution, no freedom of speech(already gone),loss of jobs(already lost),over taxation(in progress), and the loss of our life as we know it(soon to come). What kind of spell is the U.S.under? Time for a radical change vote Trump.

Being that you were trained to kill communists and apparently hate them as much as the rest of us, how do you find work in an enviorment that is loaded with them and has a direct line to the White House?

Yes Political parties are promise a lot, but complete some of them. May be trump will do that he promised yet.

ever heard of yuri bezmenov? aka. tomas shulman(sp?)?
this country is in the process of "normalization". it is that far gone.