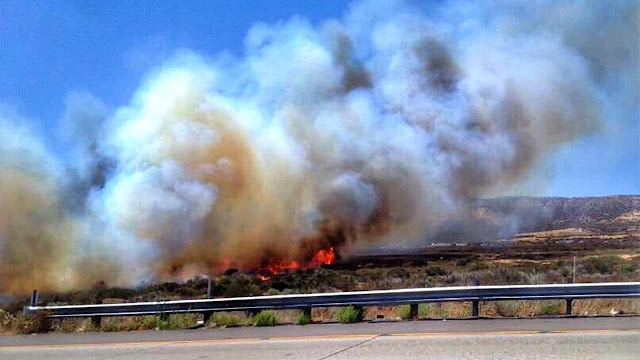 Cajon Pass, CA—For the last several brushfires that plagued this severely water parched area, claims were made that drone sightings delayed firefighting efforts.
Like so many reports by conventional pilots there’s never a shred of independent evidence such as videos, photos or the drones themselves.
The overblown and sensational claims of delayed response threatening lives and property are beyond outrageous.
Let me say that everyone is aware that conventional firefighting aircraft must fly well below the minimum airspace altitude.
Camera drones could conceivably collide with conventional aircraft within nearby airspace.  That could be dangerous.
Drone operators don’t want their drones destroyed, nor do they want their drones to be responsible for any kind of mishap.
Drone technology is evolving faster than any wildfire and drones will soon replace conventional aircraft for these sometimes-risky firefighting missions.
Are pilots making up these stories to inhibit and delay drone integration into the airspace?
Considering that despite numerous of reports of near misses there’s still never been a single collision, video, photo or recovered drone produced.
News reports of these near misses are sensationally hysterical and terribly misleading.
The nearly two million multi-rotor camera drones in civilian hands still have a perfect safety record.  No deaths, serious injuries or notable property damage.
I’m not suggesting that a collision between a civilian drone and conventional aircraft could never happen.
If the FAA declares wildfire scenes to be No Fly Zones for drones that are not directly involved in firefighting or rescue efforts that would be certainly reasonable.
Accordingly, seeing a drone operator severely punished by the FAA for knowingly entering the airspace near a wildfire would not offend any reasonable person.
We could however do without the government manipulated, hyped, Chicken Little media reports on this issue.
Posted by Paul Huebl Crimefile News at 7/18/2015 08:38:00 AM

I saw/heard this "position" on the national news (I'm in metro Chicago), as though this is an irrefutable fact. Here we go again..... It is very difficult to go up against the propaganda machine that is the MSM.

Paul, go to ABC7 Chicago and check out the story that ran on29Jul involving the use of drones to fight fires by the Orland Park Illinois Fire Department